Clinton's campaign gaffes and health issues on top of corruption and honesty problems appear to be bleeding support from Clinton's poll numbers. Meanwhile, Trump has managed to continue a more positive campaign tone. These have combined to produce striking changes in current polling data and provide the basis for a strong downward trend for Clinton and a strong upward trend for Trump in polling data.

An analysis of the trend of polling suggests the Hillary Clinton campaign has more problems than charges of "pay to play" corruption and serial dishonesty.

Clinton's continuing health issues came to the forefront with her very public problems, including her dramatic collapse during her early departure from a 9-11 memorial this past Sunday. As has become standard for the Clinton campaign, answers to reasonable questions about her health have not been forthcoming nor have they been complete. The efforts taken to avoid disclosure of her health record is a sure sign that there is something being kept from the public for fear it could harm her election chances. However, the mere fact of this withholding serves the same end. Why not just disclose the complete story and end all the speculation?

The "basket of deplorables" statement completely undermines the Clinton campaign's efforts to capitalize on any intemperate remarks made by Donald Trump. Candidates will make mistakes in the heat of the moment, yet in the case of the "deplorables" comment (repeated on two occasions), it came as a scripted part of Clinton's speech, clearly vetted by her campaign in advance. Is this just more of a "divide and conquer" strategy? Apparently, as it was accompanied by references to Republicans as "racist, homophobic, xenophobic, misogynist", etc., etc., a dishonest divisive tactic that is getting very old and stale.

On the positive side for Trump, Carly Fiorina is encouraging voters to choose Trump over Clinton. Fiorina, who had pledged to support the eventual GOP nominee, is living up to her word. Fiorina's support is an important boost to the Trump campaign. 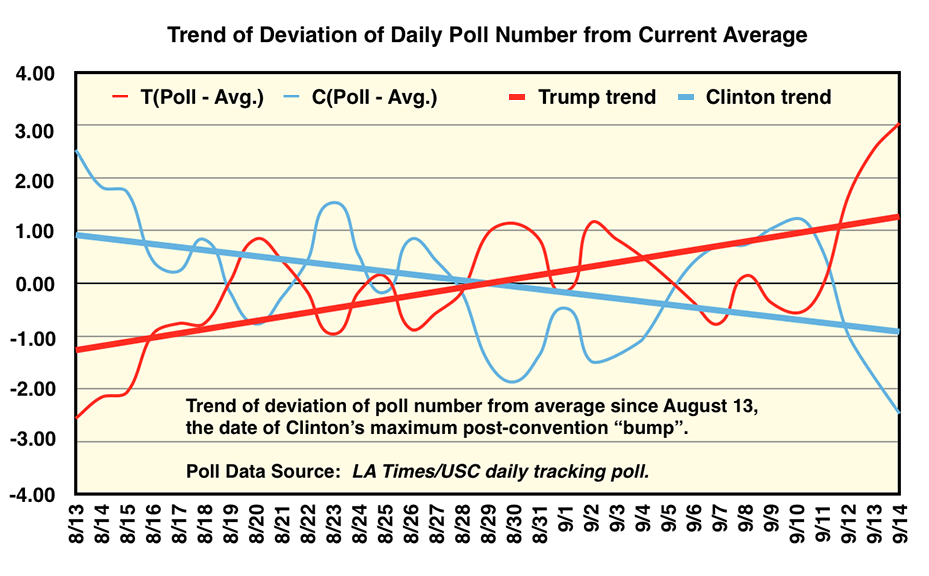 The curves above show for each date the difference between each candidate's poll number for that date and the overall average between August 13 and September 14. The trend of the deviations from the average are also shown and indicate Trump has a strong upward trend while Clinton has a strong downward trend. These trends will be difficult to shift and give momentum in their respective directions for each candidate. Good news for Trump, very bad news for Clinton.

In addition to the overall poll numbers, Trump has improved his standing in a number of key demographics:

The overall trends and the underlying movement in key demographics all point to an improvement for Trump and a continued decline for the Clinton campaign.