Hillary must think her supporters are fools

We're all familiar with Hillary's difficulty telling the truth. Her past savagery of women who came forward with testimony about Bill Clinton's sexual misconduct has little impact on many women voters. Her inability to tell the truth about Benghazi, a lie she continues to spin, is becoming legendary. Now she cannot tell the truth about her email scandal where she has clearly violated FOIA law and just as certainly violated national security.

Hillary will never improve the perception that she is an accomplished liar. It simply isn't in her nature to be truthful.

How about the cattle futures scandal?

Or her scandalous activity as chief strategist for the "bimbo eruption" squad during Bill Clinton's presidency?

Her inability to tell the truth to Ken Starr? Oh, that's right, she just couldn't remember anything. Can't blame her for a bad memory, right?

How do we know Hillary is dissembling?

Well, remember, she has said (on more than one occasion):  "Nothing... I received was marked classified".

Well, in Hillary-ese, that is being "honest" because she instructed her subordinate to REMOVE all classified markings BEFORE sending a classified document via nonsecure email!

How do we know she did this?

Because her email server told us: 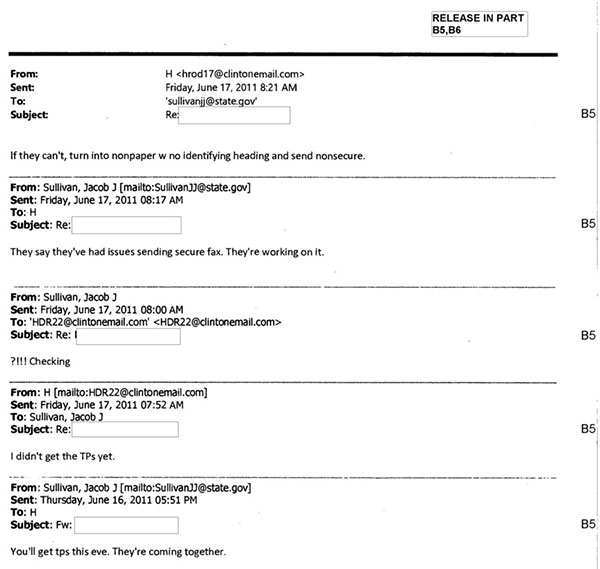 The above image (read from bottom to top chronologically) shows redacted copies of a series of email communications between Hillary Clinton and her subordinate, Jake Sullivan (her Chief of Staff at the time), in which Clinton illegally instructs Sullivan to remove classification markings from a classified document and then send the document by nonsecure email to her nonsecure email server.

"Turn into nonpaper w no identifying heading and send nonsecure"

Clinton instructed her subordinate to (1) scan the document, (2) remove all classification markings, and (3) send the altered document by nonsecure email to her private nonsecure server!

In these instructions, both Clinton and Sullivan violated federal security law multiple times, exposing the subject document to every nation that, by that time, had found a portal into Clinton's nonsecure server.

This was done because the classified fax machine was out of service. Sullivan broke security law by following her instructions.

Now we know what Hillary really meant when she claimed, "Nothing ... that I received was marked classified..."!

There is yet another side to Clinton's dissembling.

According to investigators, several of the most sensitive documents were originated by Hillary on her nonsecure computer and sent by email on her nonsecure email server. Because they originated with Clinton, she may not have marked them with proper classification so that she could claim that they were not classified when she sent them.

But her claim that they were not yet classified cannot be true for several reasons:

Yet Clinton has suggested she may have inadvertently violated State Department procedures in order to further obscure the actual truth of her national security violations.

What difference does it make, you ask?

Well, according to investigators, one of the TOP SECRET items contained in a Clinton email chain revealed the name of a high-ranking Afghan official, Ahmed Wali Karzai, the half-brother of then-Afghan president Hamid Karzai, as being in the employ of the CIA. Subsequent to that email chain, Ahmed Wali Karzai was assassinated in 2011 by the Taliban.

Anyone acquainted with the facts and the magnitude of Hillary's security breaches could not, in good conscience, consider Hillary Clinton a trustworthy individual.

Clinton is loose with the truth and accomplished at dissembling. She has no business being taken seriously as a candidate for President of the United States.

These are the facts with respect to national security law and the behavior of Hillary Clinton.

Evidently, Hillary believes that American voters are fools. How else to explain her apparent belief that she can lie her way to the presidency?

That, in itself, is a national disgrace.