A look at the April 14 northern hemisphere sea ice and land snow cover extents since 2006 reveals an unexpected shift to increasing extents, particularly of Spring snow cover. After more than a decade of no upward trend in global average temperature is this change an indication of coming global cooling?

Fargo, ND has not yet recorded a temperature as high as 40° F in 2013. Other areas of the northern tier of the US are experiencing one of the most prolonged cold and snowy winters in memory. Snowfall depths are of such magnitude that there is great concern for river flooding when warm temperatures finally do arrive. I looked at Fargo's weather forecast for the next week and noted that snow was forecast through Thursday with a chance that the thermometer might reach 40° F on Saturday. Saturday night may bring more snow.

This prompted me to lake a look at the University of Illinois' "Cryosphere Today" website wherein can be found a fairly decent image-based record of northern hemisphere ice extend on a daily basis. Beginning in 2006, the images include records of snow extent over lands of the northern hemisphere. I had not anticipated what I would find. Take a look for yourself at the following comparison of snow and ice extents in the northern hemisphere on April 14 of this year with every year since 2006, except 2009 when no image is available (click image for larger, clearer image in a new window): 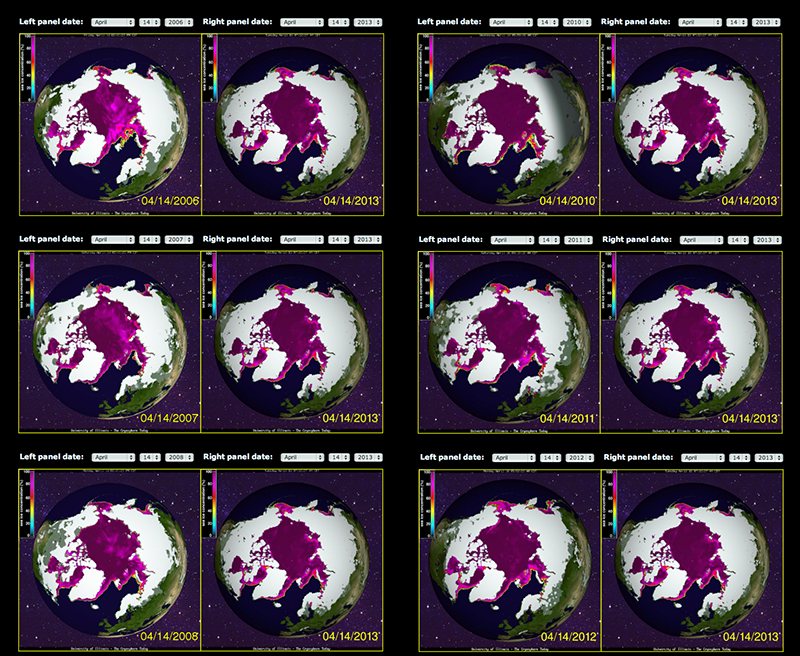 Each set of two images compares sea ice and snowfall extent for a past year with the extent that existed on April 14 of this year. Eariest comparison is at upper left, dates progress forward going down and continue in the second column.

Note that sea ice extent hasn't changed dramatically, but in the past two years is notably more than in previous years. The increase in snow cover extent is quite dramatic when compared with prior years, particularly over North America. It is worth noting that many areas near the southern terminus of the snow extend have significant snow depth, suggesting that this feature will remain for some considerable time.

While this is anecdotal evidence, we know that if the trends were revealing an opposite change, i.e., diminishing snow and ice extents, those who stubbornly cling to the pseudo-science of the greenhouse effect and human-caused-global-warming from minuscule additions of carbon dioxide into the atmosphere would be loudly trumpeting this change. Yet they simply look the other way.

I've learned over the three decades of this human-caused "global warming" hoax that whenever the evidence gets uncomfortably inhospitable to the warmist crowd, they quickly churn out more pseudo-science babble in the form of articles claiming dramatic evidence for human-caused global warming!

For those living in the real world, we'll rely on our thermometers and common sense. Though we do have real science in our corner, too (not that that means much to the warmist crowd).