"Over the past 15 years air temperatures at the Earth’s surface have been flat while greenhouse-gas emissions have continued to soar" begins The Economist article, "A sensitive time" that reveals deep cracks in the human-caused-global-warming movement.

Real world global temperature measurements that have revealed a lack of any significant climate change over more than a decade are impressively damaging the human-caused-global-warming movement. In fact, so much doubt has now been cast on the false "consensus" of human-caused-global-warming that activists who have long championed the fight to reduce fossil fuel use are now having second thoughts.

You know the global warmist crowd must be getting pretty anxious when a friendly publication prints:

"Over the past 15 years air temperatures at the Earth’s surface have been flat while greenhouse-gas emissions have continued to soar. The world added roughly 100 billion tonnes of carbon to the atmosphere between 2000 and 2010. That is about a quarter of all the CO₂ put there by humanity since 1750. And yet, as James Hansen, the head of NASA’s Goddard Institute for Space Studies, observes, 'the five-year mean global temperature has been flat for a decade.'"

This is a dramatic departure from Hansen's claims in the 1980s which predicted much higher temperatures for the early 2000s.

Attempting to keep life support on the failed AGW theory, the article goes on to state:

"Carbon dioxide itself absorbs infra-red at a consistent rate. For each doubling of CO₂ levels you get roughly 1°C of warming. A rise in concentrations from preindustrial levels of 280 parts per million (ppm) to 560ppm would thus warm the Earth by 1°C." 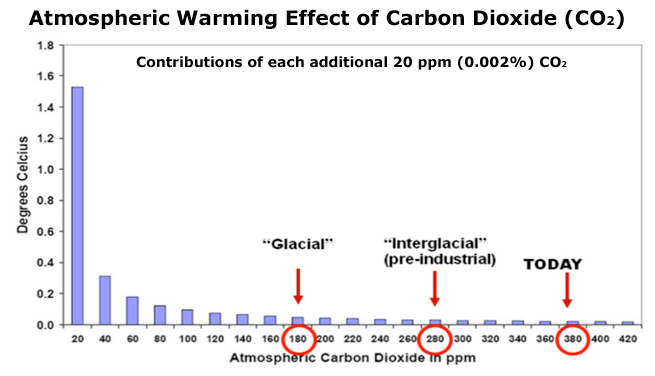 The following aspects of climate change decisively refute any claims to validity of human-caused-global-warming:

Further egregious errors are found in the following paragraph from that article:

In fact, the mismatch is not puzzling at all to scientists who have carefully evaluated the science associated with global warming claims and found it to be deeply flawed! And, yes, it does mean that one can correctly conclude that believing in a flawed theory is delusional.

Finally, there is nothing puzzling about the 100-year change in temperatures of a mere 1°C when it is put in perspective of hundred-year climate change over the past 1000 years. Earth is still recovering from the Little Ice Age. It is supposed to be warming.

A far greater threat looms in the relatively near future, that being the onset of the next Ice Age cycle as our current Interglacial climate ends. Both are due.

There is much in The Economist article that is sound reporting. It's a shame the article is corrupted by the misleading information quoted above.