The Obama regime called a rare, but scripted, press conference on Wednesday, November 14, during which Obama responded to a planted question concerning storms like Sandy and global warming. Obama's response was a classic example of a serial liar at work. Either Obama is a complete scientific imbecile (on the order of Al Gore), or he just can't stop lying about any subject.

During Obama's November 14 news conference, he responded to a question about superstorm "Sandy" and global warming with this remarkable string of blatant lies:

"... we can’t attribute any particular weather event to climate change. What we do know is the temperature around the globe is increasing faster than was predicted even 10 years ago. We do know that the Arctic ice cap is melting faster than was predicted even five years ago. We do know that there have been extraordinarily — there have been an extraordinarily large number of severe weather events here in North America, but also around the globe.”

First sentence:  ... we can't attribute any particular weather event to climate change. Wonders of wonders, that statement is actually true. But fear not, Obama breaks that spell quickly as he follows with ...

Second sentence:  What we do know is the temperature around the globe is increasing faster than was predicted even 10 years ago.

That statement is a blatant lie. In fact, global temperature change is virtually indistinguishable from zero over the period 2002 to 2011 (2012 is incomplete) while the EPA/IPCC predicted global temperatures would most likely increase by nearly 0.8şF (about 0.44şC) 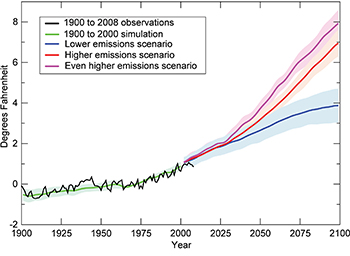 Yet the actual data reveal a temperature drop of 0.06ş C:

The difference between the projected increase of 0.44şC and the observed decrease of -0.06ş C is a net -0.50ş C. So instead of "increasing faster than was predicted," global temperature actually decreased by 0.50ş C (0.90ş F) since 2002. Either Obama cannot do simple arithmetic or he is lying.!

Third sentence:  We do know that the Arctic ice cap is melting faster than was predicted even five years ago. 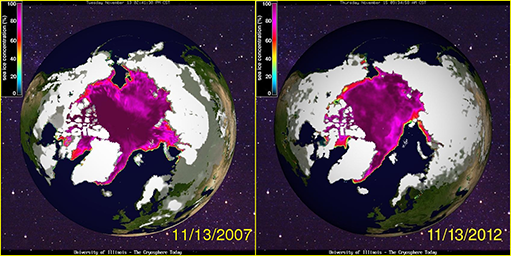 That means that there had been more ice in each summer over 2008 to 2011. Obama looks at one number and draws a false conclusion.

Furthermore, the rate of ice growth since the minimum was reached in September has surpassed all previous records with record new ice added in 2012.[4] Meanwhile, the Antarctic ice pack continues to grow, reaching near record extent.

So, at best, Obama's statement is selective and not relevant to a question about the formation of superstore Sandy. We'll call this "deception" or "misrepresentation" instead of a blatant lie.

First, however, it is difficult to compare statistics on these events over very long periods of time because it is universally agreed that weather satellite monitoring and population growth have dramatically improved our ability to detect these extreme events. In past years, unless one of these events impacted a populated area, it would likely have gone either undetected or unreported. This is evident when looking at the number of tornadoes in the US since 1950 and the fatalities from tornadoes over that same time period. While the number of tornadoes has increased (due to better detection), fatalities have dramatically gone down, again, due to better detection which provides better warning.

Hurricanes. Not even scientists can agree on the impact of any global warming on the frequency and strength of hurricanes. What we do know is that the frequency of landfalling hurricanes in the USA has been unusually low over the past seven hurricane seasons. Some believe warming will increase hurricane severity and frequency. Others claim it will diminish hurricane severity and frequency. We do know that hurricanes are nature's way of seasonally moving summer tropical heat buildup poleward. One might, then speculate that more tropical heat would produce more hurricanes. But observed data do not support either theory. So making an assertion about more "extreme" hurricanes is foolish, particularly when we've had markedly fewer hurricanes in the US over the past seven years! So Obama's statement is not confirmed by either tornado or hurricane data.

The frequency and intensity of extreme weather events are typically projected to increase in response to global warming; and the data of this study suggest that - with respect to U.S. blizzards - frequency may possibly have responded as predicted, but if it did, intensity likely did the opposite. On the other hand, the study's authors suggest that the reported increase in blizzard frequency may well be due to an observational bias that developed over the years, for which there is a known analogue in the historical observation of tornados. That this possibility is likely a probability is suggested by the study of Gulev et al. (2001), who analyzed trends in Northern Hemispheric winter cyclones over essentially the same time period (1958-1999) and found a statistically significant decline of 1.2 cyclones per year using NCEP/NCAR reanalysis pressure data. In addition, we note that there were fewer blizzards in warmer El Nińo winters than in cooler La Nińa winters, which also runs counter to predictions of more extreme weather in warmer as opposed to cooler periods of time.[5]

President Obama lied to the American people when he asserted "what we do know" about climate change and extreme weather events. We know no such things.

A truthful answer would have been:

"... we can’t attribute any particular weather event to climate change. What we do know is the global average temperature has not appreciably change over the past 10 years. In fact, global average temperature shows no real trend since 1997, a period of 15 years. We also know that while the Arctic ice cap in 2012 reached its lowest summer point since satellite observations began in 1979, ice growth since then has been at a record pace. We also know that ice pack growth in the Antarctic has continued unabated for the past six decades. In addition, we know that while we've experienced two major extreme weather events here in North America in the past seven years, hurricane Katrina and superstore Sandy, there is no evidence linking climate change to the frequency or strength of these events either in the US or globally.”

Instead, Obama brazenly lied when he claimed (1) the globe is undergoing significant warming (it is not), (2) that Arctic ice is melting at an alarming rate (it is now in a rapid, record seasonal growth), and (3) that an "extraordinary" number of "extreme" weather events are being experienced in the US and around the globe (they positively are not).

In short, President Obama has once again demonstrated he is a serial liar.

Why would he say those things and why did he have that question asked so that he could say them?

Because he wants to use the human-caused-global-warming scam to justify his ramped up war on fossil fuel energy. He intends to further restrict and shut down coal operations and coal-generating power plants and he intends to further block recovery of domestic oil and natural gas, just as he has done over the past four years.

This is what you get when you put a radical Leftist ideologue in power and allow his corruption to fraudulently enable him to stay in power.

Prepare for much higher electric bills and much higher gasoline prices. They are coming to you in Obama's second fraudulent term.

[2] How to Fool People Using "Cherry-Picked" Climate Data, Peter Glieck, February 5, 2012 Forbes Magazine (based on tabulated annual temperature differentials from the mean of 1951 through 1980 by NASA's Goddard Insitute for Space Sciences).