Wake Up America - It's Your Last Chance to Get it Right!

Our nation is at the crossroads of two very different futures.

Our nation is at the crossroads of two very different futures.

One road leads to a future full of opportunity, freedom, massive economic expansion, stable prices, abundant supplies of affordable electricity and fuel, and the enormous prosperity that these conditions bring.

So why aren't more people aware of this critical choice? Why are so many apparently willing to continue in office a man who is a demonstrated failure as President?

And what, really, do we know about President Obama and his beliefs? 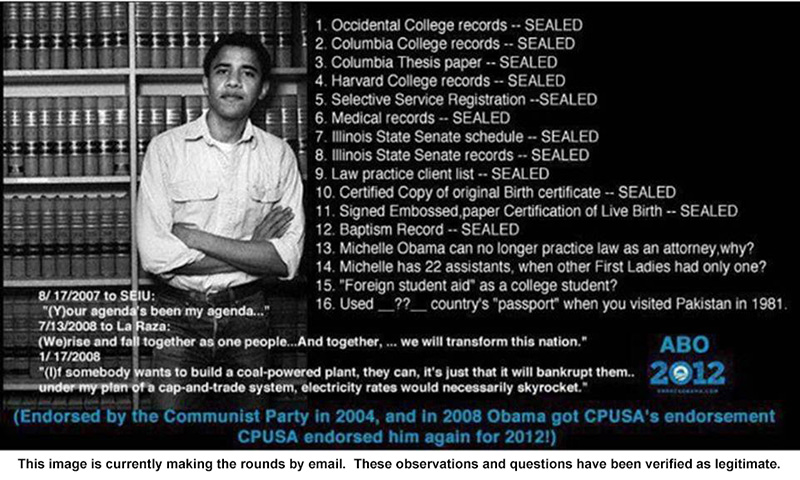 Why is this man so smug and what doesn't he want us to know?

The above quotations by and about President Obama are worth repeating so they can be digested and contemplated:

If this information makes you uncomfortable because you support Obama's re-election, then you deserve to be uncomfortable for supporting the continued destruction of this once-great nation with policies that are nothing short of bizarre.

Why would any reasonable person support this man over the candidacy of a proven executive leader who knows how to work with both parties to accomplish common goals?

Consider this analogous situation to our election choices:

Suppose you have a business and your accountant retires after eight years. To your horror, you discover the accountant did not follow proper procedures and left your books in disarray.

You interview a young man with an accounting degree who hasn't actually practiced accounting, but who impresses you as a polished speaker who has a nice neat appearance and a congenial manner. So you hire the young man who promises to put your books in order without delay.

But, after four years you realize the young inexperienced accountant has your books in greater disarray than when he was hired! So you speak with him and question his lack of performance. All he can do is blame his predecessor for a problem his limited background simply couldn't solve.

So you ask him to give you a reason why you shouldn't replace him with a seasoned accountant with a demonstrated record of success at resolving accounting books in disarray and who is willing to take on the current accounting mess and clean it up.

All the young man can do is repeat blaming of his predecessor and cast aspersions on the accountant you are considering as his replacement.

What would you do?

I don't think so.

Consider that, since our nation's founding, millions have died in service to our country to protect the constitutional republic created and guaranteed us by our founders. Those millions did not die so that a corrupt and highly-biased news media could cover-up the agenda and massive shortcomings of one who lacks the capacity to hold an office of trust in our government. Those sacrifices were not made to support the agenda of a public education establishment that sees nothing wrong with failing to instruct our youth in civics and provide them with a sound understanding of the form, purpose, and limitations of our federal government under our Constitution so that they are equipped to cast intelligent votes.

Because our public education system has so thoroughly performed civics lobotomies on generations of Americans who have little or no understanding of our constitutional republican form of government, we now find ourselves in a situation where the very survival of our nation is in real and imminent danger while so many of our citizens remain blind to the perilous position in which our nation finds itself today. They are blinded by a corrupt biased media and an education system that created their ignorance by failing to provide the education they should have received.

Ask yourself what protections should we expect from a Constitution when we have allowed it to be routinely ignored by Washington politicians?

If the 10th Amendment (empowering States and emphasizing the limited power of federal government) can be so frequently and easily bypassed, what guarantee is there that the 22rd Amendment (limiting Presidential terms to two) cannot be as easily ignored, paving the way for a "President for life" who promises a continuous stream of "goodies" to the "entitled culture" in exchange for their adoring support?

Wake up, America! This may truly be your last chance to get it right.