MSNBC deliberately lies about a gun-toting incident at an Obama rally, clearly saying that "white people" are carrying guns at a "man of color" rally. In fact, the gun-toting man was a black man, but MSNBC carefully edited video footage to make it look like he was white! Will the lying and racism as MSNBC ever end? Only when MSNBC ends.

A man was videotaped and photographed carrying a gun at an Obama rally this past week. As one would expect, this is a big news item. But, oh my, how are the propaganda-makers posing as news outlets going to deal with the fact that the gun-toting man was black? Simple. Just don't report that and make it appear as if the man had been white. MSNBC takes it even further ... actually claiming that the man was a gun-toting "white man":

MSNBC Newscaster: "... white people showing up with guns strapped to their waists ..."

Except there was only one person and he wasn't white! 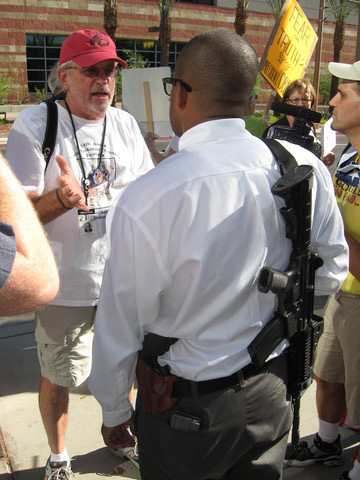 Note how the video was cleverly edited to lead the viewer to believe that the gun was carried by a white man (further embellished to claim "white people" as if there were more than one gun-toting protester!).

How long are the American people going to tolerate this kind of blatant lying propaganda from America's most left-wing news outlet?

Here's a suggestion. Though it might be painful, record MSNBC for several hours. Then use your fast-forward to ignore the clap-trap of venomous nonsense spewed by MSNBC's "reporters" and note all the commercial sponsors. Write to them and pledge never to buy their product again until they withdraw sponsorship of this disgraceful excuse for a "news" station.

And we used to think that CNN was bad. Thanks to MSNBC, CNN begins to look respectable again!

If this kind of racist propaganda disturbs you, do not ignore this opportunity to do something about it.