Get Real about Climate Change

Contrary to the "fragile Earth" claims of environmentalists, Earth is far more resilient than envirozealots would have us believe. At no time in Earth's climate history has carbon dioxide (or any other greenhouse gas) been shown to have had a causative relationship with significant climate change. Proposals to waste billions or trillions of tax dollars on climate change schemes that will have absolutely no impact on climate is pure folly.

We've all heard the repeated claims by climate alarmists that emission of greenhouse gases (principally, that absolutely essential plant nutrient, atmospheric carbon dioxide) by human activity poses a serious, grave, imminent, catastrophic (freely substitute your own hysterical term) threat to life as we know it -- all as a consequence of anthropogenic global warming (warming of human origin). Inconvenient climate cooling has morphed recent hysteria from "global warming" to "climate change" so that any climate deviation is now claimed as evidence of irresponsible human activity.

What human activity is the source of all this predicted calamity? Why, using abundant fossil fuels available at relatively low cost to provide for the energy and fuel needed to achieve and sustain a high standard of living. We can't have well-off countries enjoying a higher standard of living when others are suffering. So the politically-correct movement takes aim on the energy and fuel industries that provide the fossil fuels needed to drive a healthy economy that maintains and raises living standards.

But climate change reality is far different from the silliness portrayed by the hysterical hype of fund-seeking government scientists and politically-correct politicians allied with environmental zealots whose passion far exceeds their common sense and scientific acumen.

Earth is far more resilient than these envirozealots would have us believe. A planet that has withstood repeated pounding from both impacts of objects from space and enormous shield volcano eruptions that can wipe out most life in a "blink of an eye," can certainly withstand the puny effects of human activity. Consider that every 1% (by today's Earth age) of Earth's age the constant action of plate tectonics will change Earth's surface features dramatically from what humans have always recognized. All these natural changes can severely impact global climate.

Earth's natural climate change history informs us that there are very complex and powerful forces that work to constantly alter climate. Yet, through all this, Earth's climate has tended to move inexorably toward a relative stability within a climate range suitable for a great variety of life forms.

At no time in Earth's climate history has carbon dioxide (or any other greenhouse gas) been shown to have had a causative relationship with significant climate change! Yet the IPCC and Gore-hysterics claim puny human emissions of CO2 are sufficient to "catastrophically" alter Earth's climate! 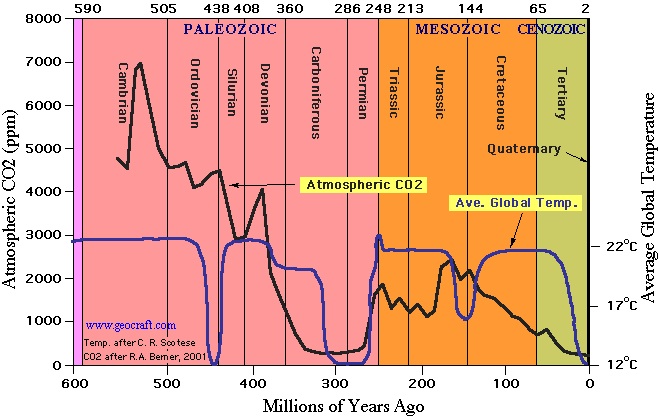 The geologic record clearly shows on a relatively minor level, greenhouse gases respond to changes in climate; they do not cause it! There is no meaningful debate on that. At times when Earth's CO2 has been many thousands of parts per million (compared with today's very small 385 ppm estimate), the planet has been locked in millions of years of both tepid temperatures (the rule, by the way) where there is no permanent ice at sea level anywhere on the planet, and glacial ice eras where for millions of years nearly the entire planet is covered in ice.

The suggestion that the puny human addition of a few ppm (a portion of which come from fossil fuel consumption) to annual natural CO2 emissions is sufficient to dramatically alter climate is unsustainable by either science, observed reality, historic geologic evidence, or common sense.

Wasting hundreds of billions or trillions of tax dollars on climate change schemes that will have absolutely no impact on climate is pure folly. No nation can afford to commit one penny to insane policy even when economic conditions are robust; it is unconscionable folly that politicians should be contemplating such insanity during a time of economic recession.

It's time to get real about climate change and move on to issues that are of real significance to humanity.

For links to a wealth of information about climate change including links to excellent books available through Amazon.com, go to WEBCommentary's Climate Change page at http://www.webcommentary.com/climate/climate.php.