Just when we thought things couldn't get much worse for the Obama administration, Obama's new Science Adviser makes an absurd statement suggesting an even sillier "solution" to a non-problem. Can it get any worse?

A recent newspaper story headlined “Obama looking at cooling air” attributed a statement to John Holdren (Obama’s new science adviser) that “global warming is happening so rapidly” that the administration is considering experiments designed to cool the planet!

The first absurdity is Holdren's contention that warming is happening rapidly when, in fact, the best record of global temperature (satellite measurements) have shown an accelerating cooling trend that began about the turn of the century! 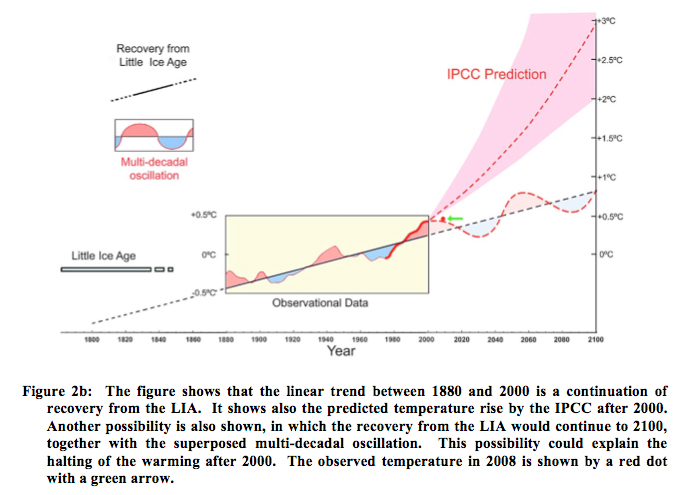 Note the green arrow pointing to 2008. This chart is from a paper by Dr. Syun-Ichi Akasofu linked to near the end of this commentary (see also http://icecap.us/images/uploads/USHCNvsCO2.jpg).

If Holdren's name sounds familiar, it should be. This is the same John Holdren who collaborated with Paul and Anne Ehrlich when the three of them loudly sounded the alarm in the late 1970s that human-caused global cooling (from pollutants) would bring an imminent ice age threatening life throughout much of the planet.

Holdren and the Ehrlichs have a long history of peddling "chicken little" doomsday predictions.

Readers may recall Paul Ehrlich as the author of "The Population Bomb, [in which] Ehrlich predicted that hundreds of millions of people would die of starvation during the 1970s because the earth's inhabitants would multiply at a faster rate than world's ability to supply food. Six years later, in The End of Affluence, a book he co-authored with his wife Anne, Ehrlich increased his death toll estimate suggesting that a billion or more could die from starvation by the mid-1980s. By 1985, Ehrlich predicted, the world would enter a genuine era of scarcity. Ehrlich's predicted famines never materialized. Indeed, the death toll from famines steadily declined over the twenty-five year period. Though world population has grown by more 50% since 1968, food production has grown at an even faster rate due to technological advances." (quotation from paper describing Dr. Paul Ehrlich)

Ehrlich's doomsday predictions weren't limited to global cooling and his population bomb. Ehrlich was the one who in 1980 rang the alarm about rapidly depleting natural resources that would bring catastrophic human suffering in the near future.

Economist Julian Simon challenged Ehrlich to pick any five nonrenewable natural resources that were threatened with depletion that would justify his doomsday claim. Simon wagered that Ehrlich's “basket” of resources would have a lower value in ten years, clear evidence that Ehrlich was wrong. Ehrlich accepted the challenge and chose none other than John Holdren as his adviser in picking his basket of resources.

After ten years, as Simon wagered, not only was the basket of five "threatened" resources valued lower, each of the five “threatened” resources was lower in cost!

Similarly, “global warming” is a figment of this administration’s imagination. As a nearly decade-long cooling trend is expected to extend at least another 20 years, it is no longer amusing to indulge the fantasies of people like Holdren.

Yet Holdren proposes yet another absurdity. He is evaluating a proposal to seed the atmosphere in an effort to artificially cool the planet to head off his imagined "global warming."

The IPCC’s theory of human-caused global warming has not only been shown wrong by actual observed climate over the past ten years, but by just about every credible piece of scientific research performed since 2005 that has strongly endorsed the position that neither humans nor the so-called “greenhouse effect” are responsible for natural climate warming experienced during the latter part of the 20th Century that ended nearly a decade ago.

For a clear picture of the natural climate variability that the global warming alarmist crowd has tried to use to destroy the fossil fuel industry, read this excellent analysis Two Natural Components of the Recent Climate Change (2 Mb pdf) by Dr. Syun-Ichi Akasofu (note chart from page 7 above).

Given the abominable ignorance of highly placed "scientists" in the Obama administration who are peddling such nonsense as Holdren, one has to wonder just what are children being taught about this topic in our schools? If you are a parent of a student of any age, you had better find out what kind of "science" they are being taught. Be prepared to learn that the education you pay for may, in fact, be little more than indoctrination and political science.

For more information about climate and climate change, see the extensive resources at WEBCommentary's Climate & Climate Change Page or visit links under the topic Climate/Climate Change on our Links Page.